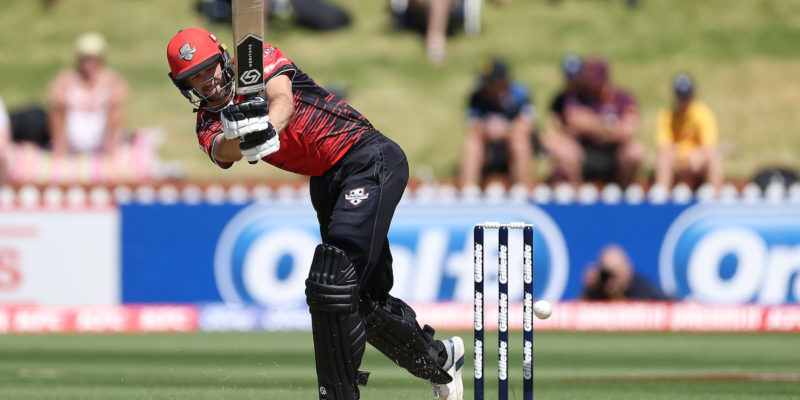 Despite a fierce start to this top contest from the Canterbury KINGS, the Wellington Firebirds fought their way back to win with two balls to spare.

It was an impressive performance from the defending champions – but at the cost of young gun Rachin Ravindra who dislocated his shoulder in the field.

Ravindra took an outstanding catch to dismiss Chad Bowes, and it needed something special after Bowes and Ken McClure finally got their side off to the powerful start they had been seeking.

They put the Firebirds under the pump in the power play, taking 37 just from the first three overs.

McClure took 20 all by himself off Ben Sears’ first over, and that in itself was a statement after the previous day’s heroics from the young windmill.

Together the opening pair put on 59 before McClure edged Hamish Bennett behind after 36 from just 15 balls: satisfaction at last for Bennett who had just watched another 14 fly off his over in the breezy capital.

The reintroduction of Sears in the seventh over was a turning point for the top-of-the-table hosts as he pegged it back, in tandem with Ravindra, then got the vital wicket of the boisterous Bowes at 90/2.

After five games in the doldrums, Bowes had been looking back to his dangerous best, but here’s where Ravindra’s sprawling catch in the deep came in to prevent him from reaching his second half century of the league season.

Now Sears had his wind up and his last over, the 13th, produced two valuable cheap wickets in Jack Boyle and then Cole McConchie for a three-ball duck, Sears signing off with 3-34.

Tom Blundell then pulled off a stunning cartwheel of a catch behind the sticks to give Bennett the prized wicket of Daryl Mitchell for just 11 at 118/5: now the game had swung right back to the Firebirds’ camp, and they would concede only one boundary in the last five overs as they held the KINGS to 153 for seven.

That was perhaps 20 runs short of par, but the KINGS started well with the ball as well to put the Firebirds under early run pressure. Finn Allen’s fickle micro-slump continued as he fell to a good low catch by Matt Henry off Ed Nuttall at the end of the fourth over, the Firebirds 21/1 and well behind the KINGS’ 45 for no loss at the same stage.

But things can change quick in a T20.

Opener Devon Conway had in the meantime got his eye in, and began elevating the pace with new man Tom Blundell. They shared a nice little stand of 60 in seven overs, Conway reaching his half ton before departing caught off Henry two balls later.

The departure at 81/2 was followed by some tight work from Todd Astle, Mitchell and McConchie through the middle that gave the KINGS another life, Blundell and Troy Johnson meanwhile keeping things steady ticking over until Astle broke through with Johnson’s wicket at the end of the 18th.

Now the Firebirds needed 20 off the last two overs: game on for both sides, with the King of the death overs Will Williams coming on to bowl the 19th. Crucially Blundell danced down the wicket and lofted him for a fine six second ball, a stroke that also brought up the BLACKCAP’s 50 off 38 balls.

Nineteen from 11 was suddenly 13 from 10 which Blundell and captain Michael Bracewell were able to tick off with two balls to spare.

The KINGS had missed out on four coveted points that would have taken them ahead of the Central Stags and equal top on points with the Firebirds, all contending teams still jostling for qualifying positions. Instead it was now advantage Firebirds who will need just the one further victory to go beyond reach in the numero uno spot.