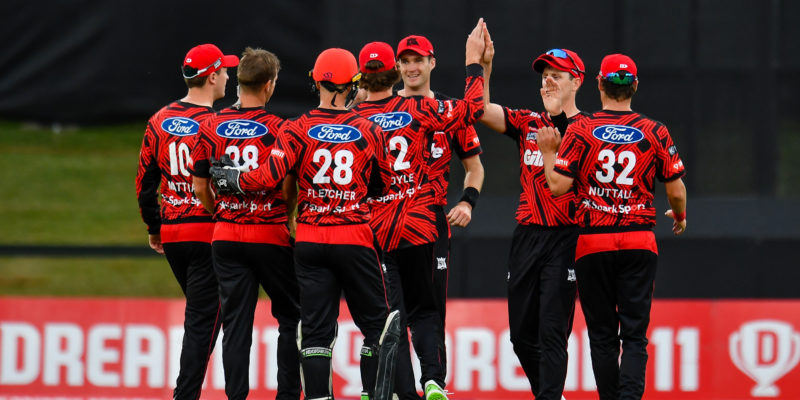 A toss win for Canterbury KINGS seemed like the last stroke of luck, as Wellington Firebirds opening batters put on a show at Hagley Oval.

Firebird Finn Allen pumping the first delivery of the match into the pavilion stands for six set the momentum for the innings, showcasing the youngster was back into business. Allen and T20 debutant Luke Georgeson were seeing the opening ball in like a beachball, hitting a whopping 12 boundaries inside the opening powerplay, and the Firebirds were sitting comfortably 73/0 after the first 6 overs.

Ed Nuttall made the much needed breakthrough in the 9th over, as Blake Coburn took a diving catch in the outfield to dismiss Georgeson for 30 off 22 balls, to end the opening partnership of 89. Nuttall continued to deliver, two balls later following Allen moving across in his crease, forcing Allen to slice the ball to backward point and end the destructive batter’s innings on 57 off just 29 delivers, hitting eight boundaries.

The Wellington Firebirds continued to find the middle, with captain Michael Bracewell hitting a fast 27 off 17 deliveries. KINGS fielders put in the yards, putting on a fantastic catching performance for the home crowd, particularly Will Williams showing off his safe pair of hands taking two running and sliding catches in the outfield.

Firebirds finished off their innings posting 177/7 hitting a huge 21 boundaries, with 6 of the 7 dismissals of the innings all caught. Ed Nuttall was the pick of the bowlers with figures of 3/31, with McConchie, Shipley, and Henry taking one each.

As the sun set on Hagley Oval, Chad Bowes and Ken McClure took to the field to face a new white ball under lights. On just his second delivery, McClure falls victim to what could be the catch of the summer. McClure pumped the delivery towards deep square leg, it’s looking to go for six, but Nathan Smith leapt across the boundary rope in the air bringing the ball back into the field of play before a foot touches outside the boundary. He dove forward again, safely rolling onto the field with the ball in hand, and McClure had to depart for nil.

Bowes looks comfortable, middling one through the covers for four, before shortly chipping one to mid-off in the third over and the KINGS have lost both their openers cheaply within the powerplay.

All eyes were on Jack Boyle, as he clears the rope pumping deliveries into the crowd comfortably, and leads a 40 run partnership with captain McConchie looking to steady the run chase.

Firebirds Bracewell and Younghusband replied with a burst of wickets, first sending McConchie back into the sheds after part-time keeper Allen takes his first dismissal of the season, stumping the skipper.

Scoreboard pressure was on, and Boyle and Fletcher fell next within six balls of each other looking to hit big boundaries, as the run rate required climbed and the KINGS needed 77 runs off the last five overs for the win.

A last dance attempt from Williams and Coburn saw Williams hit an impressive unbeaten 29* from 17 deliverers, hitting three fours, and one six in the 43-run partnership between the pair.

The ask was too much, and the KINGS found themselves 28 runs short of the victory, hitting just 14 boundaries in their innings against a strong new-look Firebirds side, boding a trio of debutants in Nick Greenwood, Luke Georgeson and Tim Robinson.

The Canterbury KINGS look to get their first points on the board against the Central Stags when they take them on in the second home double header at Hagley Oval on December 10. Watch the game live on Spark Sport, or tickets are on sale now THROUGH THIS LINK