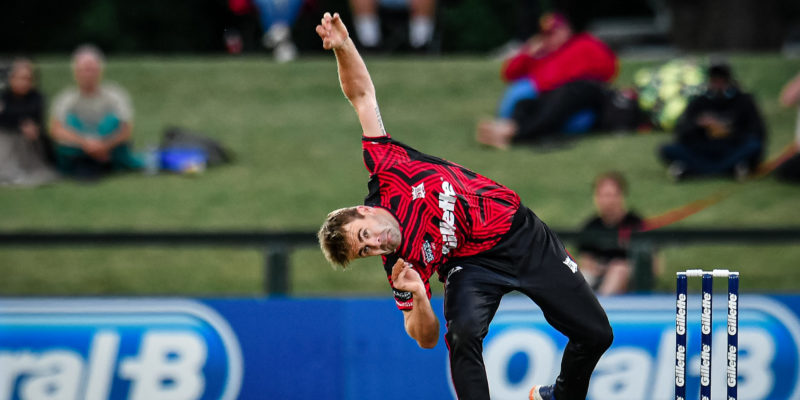 Blake Coburn has been named in Canterbury’s second round of contracts.

The left-arm unorthodox spinner has found himself back amongst Canterbury’s contracted players after a string of impressive performances in last years’ Super Smash and finishing as top wicket taker in the Hawke Cup.

“This is such an amazing reward for Blake. He’s been without a contract the last couple of seasons but has continued to work extremely hard on his bowling.”

“He’s been in and around the squad and when he’s played, he’s done really well.”

“He brings that X-factor our bowling attack and with the further experience he’s gained he’s really going from strength to strength.”

“It’s an exciting time for Canterbury Cricket when you look at our bowling stocks and it should make for a very exciting season.”

Coburn’s distinctive bowling action has been the topic of conversation amongst cricketing circles in Canterbury for some time now, with the left armer’s torso rotating downward and his head getting below 90 degrees when releasing the ball. It’s an action Coburn says suits him fine.

“Yeah it’s something I’ve had since I was a kid and I’ve grown to learn to use it and improve it, but yeah, it’s a little bit different to say the least.”

Coburn is excited to focus on cricket full time and learn as much as he can from some of Canterbury’s senior wrist-spinners,

“Having Ish [Sodhi] here is another bonus and being able to work with him on a full time basis, when he’s here, is going to be amazing, along with Toddy [Todd Astle] as well.”

Canterbury Cricket has one final contract to announce in the wake of Will Williams’ move to Lancashire this week. This final 16th contract will be announced in the coming weeks as the High-Performance team finalises their squad.