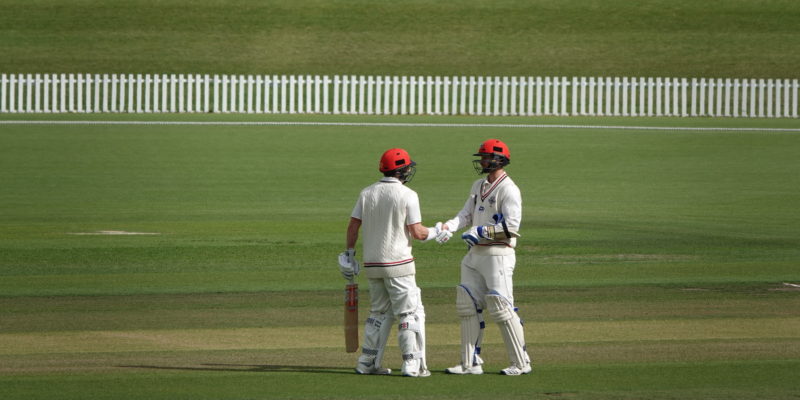 Canterbury continued to run away at the top of the leaderboard, opening up a significant 32-point margin over the next best team, Northern Districts, with a well executed victory over the Volts in Round 5.

With a target of 352, the Otago men had made a good, positive start to the final day in Christchurch, reaching 82 for no loss before spinner Cole McConchie trapped Anaru Kitchen just short of a half century.

It was the start of a sudden flurry for the Canterbury captain, claiming Mitch Renwick off his next over and then coming back after lunch for the big wicket of Hamish Rutherford at 100/5.

In between, Matt Henry had accounted for Nick Kelly and Dale Phillips in the space of three balls in the 38th, suddenly pulling the rug out from under Otago’s feet.

Otago were still in the game if they could get another partnership going, but after Fraser Sheat picked up the crucial wicket of Michael Rippon – without his usual batting buddy Nathan Smith (off the field injured), the wickets started clattering like dominoes as Canterbury ripped through the tail, the Volts done at 163/9 with Smith unable to bat.

The runs continued to flow at Hagley Oval as the Volts made a game declaration, 142 runs behind in the first dig. Captain Hamish Rutherford stopped the clock at 375 for six, after Nick Kelly and Dale Phillips had joined him in posting a half century in the innings.

The Volts then headed into bowl once more without opening paceman Jacob Duffy who had injured himself early on the first day – and Tom Latham pounced, scoring his fifth Plunket Shield century off just 80 balls (14 x4, 2×6).

Latham shared a 78-stand with Henry Nicholls for the second wicket and an 83-run stand with Daryl Mitchell for the fourth, guiding his side to 166/4 inside just 26 overs.

The cracking pace saw Cole McConchie declare in turn at 209/5 in the last session, setting the Volts a target of 352. The southerners will resume the final day at 15 without loss.

The Otago Volts finally broke Canterbury’s monumental stand for the sixth wicket which reached 305 – a total in itself, before Leo Carter (169 off 163 balls) was caught off spinner Michael Rippon.

His stand with Cam Fletcher had set a new sixth-wicket record in matches between the two South Island sides – bettering the unbeaten 293* partnership set by the current Canterbury coach, Peter Fulton, and Neil Broom in 2004/05 back when the Otago man was sojourning in Canterbury.

Dependable keeper-batsman Fletcher meanwhile reached 150 for the first time in his first-class career, taking Canterbury past the 500 mark before finally departing on 157 (172 balls, 23 boundaries, 2 sixes).

The end came quickly after that, Rippon (3-105) and Travis Muller (5-131) blasting through the tail in just the six overs after Carter’s demise. Muller’s hard-earned bag was the sixth of his first-class career, but his first for the Volts as he continued a good season in both red-ball and white-ball formats for the side.

The Volts faced a daunting first innings target of 517 to match their hosts, but a strong team and top order effort saw them make a good start, 218/3 at stumps and the deficit chopped down to 299.

Captain Hamish Rutherford and Anaru Kitchen put on an opening stand of 55 in 20-odd overs before Kitchen chopped on against Matt Henry, on 33.

Rutherford settled in for a further 20 overs, taking his side to 135/2 in an 80-run stand with Mitch Renwick for the second before he, too, choppped one on, this time against Sean Davey.

The skipper had contributed 60 in almost three hours at the crease, Renwick then taking the Volts past 150 before becoming the last wicket of the afternoon when Will Williams bowled him on 42.

Nick Kelly reached a patient half ton before stumps with Dale Phillips unbeaten on 24* and looking to press on for the fourth-wicket stand on the third morning from 218/3 overnight.

Fresh off a Ford Trophy title win at the same ground, Plunket Shield leaders Canterbury made a sound start to the resumption of their first-class season.

Despite having lost the toss, by the end of the first day’s play the Hagley hosts were not only in a good position at 435/5 – maximum batting bonuses already achieved, but they were at the only game to get sunshine and a start as the championship entered the business end of the season.

The chasing rivals ND (sitting second and still 20 points in arrears), the Aces (21 behind Canterbury), the Stags and Firebirds had all sat around watching rain in parts further north, but again in Canterbury the home team was able to make the most of their long, dry summer.

Starting on time, opening pair Tom Latham and Ken McClure got through the first 16 overs before McClure attempted a pull shot that sent Volts keeper Max Chu running a mile behind the wickets, the ball with snow on it before he completed a challenging and fine catch.

Latham departed the very next over, Chu suddenly in the action again: this time diving to his left to give Michael Rae his first wicket at 50/2.

Cole McConchie then played all around Travis Muller to give the big paceman his second, and Canterbury was faltering somewhat at 57/3.

But a solid century stand between Henry Nicholls (72) and Daryl Mitchell (56) for the fourth wicket allowed Canterbury to take a hold, the pair carrying on past the lunch break to take their side to 174/4.

Just as something even bigger seemed on the cards, yet again the Volts went bang-bang to remove them both in the space of three overs – Mitchell falling victim to Michael Rippon and Nicholls run out off a tight single, Chu again in the thick of it.

What could have been an opening for the Otago Volts was slammed firmly shut by Leo Carter and Cam Fletcher, however.

Fresh at the crease together before tea, they carried on throughout the rest of the afternoon to reach 435/5 by stumps.