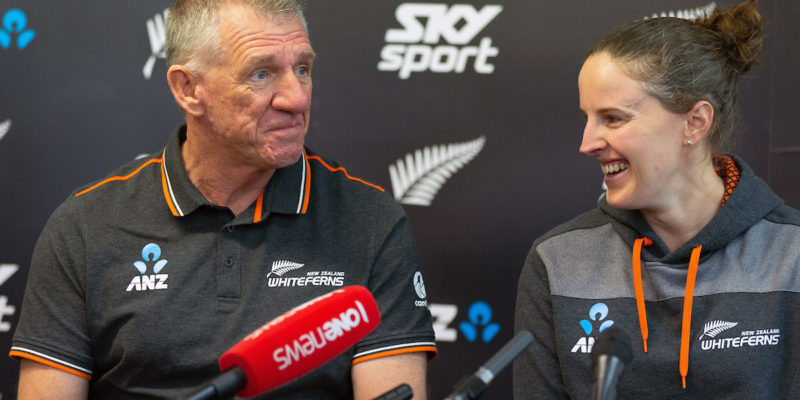 Ex Canterbury player & coach Bob Carter has been appointed WHITE FERNS head coach until the end of the ICC Women’s World Cup 2021, set to be hosted in New Zealand.

Bob, the father of Canterbury batsman Leo Carter played First-Class and List-A cricket for Canterbury between 1981-85 before moving into a career in coaching.

Carter, twice a BLACKCAPS assistant coach, was the WHITE FERNS interim coach for their most recent tour to Australia and has been working with the team over the winter in his role as High-Performance coach.

“I see a lot of potential in this particular group of cricketers,” said Carter.

“We have a good blend of youth and experience that we can build from and I feel very positive about this next chapter of WHITE FERNS cricket.”

The WHITE FERNS play South Africa in three ODIs and five T20s this summer before embarking on a T20 World Cup campaign in Australia.

“It’s an exciting time to come on board with two big world tournaments on the horizon.

“We have the ICC T20 World Cup in Australia in February next year and the Women’s World Cup 2021 that we are hosting here in New Zealand – it’s a big couple of seasons coming up.

“We have a number of senior players who have been performing at the top of the international game and remain committed to working hard in bringing success to the WHITE FERNS. With two ICC World Cups coming up and the women’s game growing at all levels, it’s a great time to be involved.”

Head of High Performance, Bryan Stronach said after interviewing several strong candidates for the role, Carter’s experience saw him emerge as a clear and obvious choice for the role.

“We’re delighted to have Bob signed on and working with our top female cricketers,” said Mr Stronach.

“The recent Women’s MOU has been a good development for the women’s game but with the added funding and support comes an added professional responsibility.

“The players have endorsed Bob as a coach and enjoyed working with him in Australia.

“They’re keen to get stuck into what should be an exciting summer of cricket.”

He said Carter’s many roles within the NZC family held him in good stead for the WHITE FERNS job.

“We’re delighted for Bob and know he will do an excellent job,” said Mr White.

“It’s been a progressive time for women’s cricket and this latest appointment is another positive step forward for the game.”

Carter has already officially started in his new role and will get his first chance to have the WHITE FERNS squad together at a training camp starting 22 September in Lincoln.

NZC will now look to appoint the support staff roles for the WHITE FERNS with input from Carter.