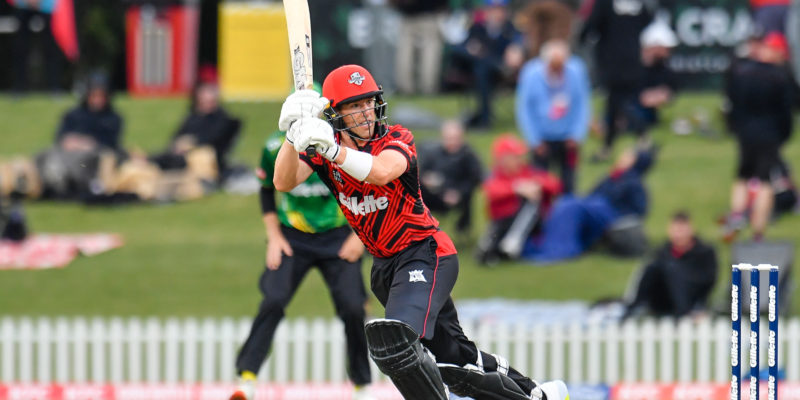 The Canterbury KINGS are on the board, after Captain Cole McConchie starred in Friday night’s contest with the Central STAGS which saw our KINGS come home with a 47-run win. Debutant Mitch Hay and BLACKCAPS Matt Henry and Todd Astle had memorable contributions to seal the KINGS first win of the season.

The coin fell the right way and skipper McConchie chose to bat first against top of the table Central STAGS. Ken McClure opened with Chad Bowes, and McClure took no time seeing the new ball in, pummeling the first delivery of the match through the covers for four, and again two balls later.

However, BLACKCAPS quick Blair Tickner took control of the powerplay and dismissed both openers cheaply before the 6th over. Ben Wheeler then sent one through Leo Carter’s defence in the 6th over, and the KINGS found themselves three wickets down at the end of the powerplay for 40 runs.
McConchie and Cam Fletcher set out to build a platform and steadied the team to 71/3 after the 10th over. They boasted a 35-run partnership before Fletcher danced with a Doug Bracewell bouncer and gloved the ball to Dane Cleaver behind the stumps, dismissing him for a cameo of 18 of 17 deliveries, bringing debutant Mitch Hay to the crease.

The younger Hay and McConchie put on a show for the home crowd, reaching the boundary rope eight times in their 67-run partnership, including Hay hitting Tickner for show-stopping back-to-back sixes. The pair took the team to 140/4 after the 16th over, before Hay’s quick knock of 29 off just 16 balls ended.

McConchie continued to dominate, almost taking his commanding innings to the end before being caught in the deep in the 20th over. The captain’s knock of 84 off just 54 deliveries hitting six four’s and three sixes, was his highest ever T20 score, surpassing 1000 T20 runs for the Canterbury KINGS in his innings.

The KINGS posted 172/8 after their 20 overs, a par score against a strong unbeaten CD side off the back of two strong wins.

But with BLACKCAPS and KINGS spin weapon Todd Astle back in the country and available for selection, the KINGS bowling attack came down hard on the CD batting line-up.

It was the Ed Nuttall and Matt Henry show to start the KINGS off, as the duo stood out dismissing top order CD batters Wiggins, Hay and Cleaver all within the powerplay. An astounding grab from Nuttall plucking the ball out of the air with one hand, put the KINGS fielding attack in full throttle.

Ed Nuttall take a bow! Hard work in the field from our KINGS paying off! STAGS 30/3 after the powerplay!

Astle then came into the attack and never let the CD middle order get going, conceding only singles off his overs and picking up wickets along the way to finish with world-class figures of 2/13 off his four.

Seven wickets down, the STAGS required 75 runs off the final five overs for victory. A job that was too much of an ask for the unbeaten central side, who swallowed a 47-run defeat to the KINGS in a classy display of fielding and bowling on home turf.

Matt Henry was the pick of the bowlers taking 3/11 off his four overs, with Nuttall and Williams also taking one wicket each.

The Canterbury KINGS are now on the board with their dominant performance over current top of the table Central STAGS. The KINGS next re-face the Wellington FIREBIRDS in their first away game of the season on Sunday the 19th at the Cello Basin Reserve. Watch the game LIVE on Spark Sport.