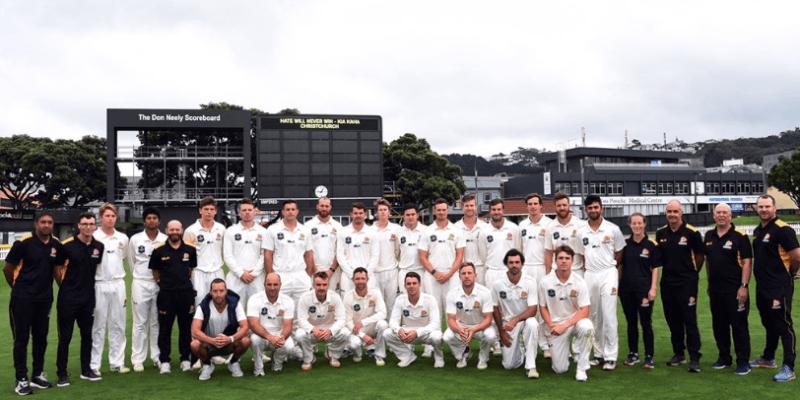 The Firebirds players and Staff stood together this morning to show their support for all affected.

NZC’s 2018/19 Plunket Shield first-class national championship has been decided with a round to spare in sad and unique circumstances.

Competition leaders the Central Stags will be presented with the trophy later this week at Seddon Park, Hamilton, after the sole other remaining contender, Canterbury, withdrew from its concurrent final match of the season in response to yesterday’s terrorist attacks in Christchurch.

Canterbury’s final four-day match against the Wellington Firebirds had been scheduled to begin at the Basin Reserve tomorrow.

Canterbury Cricket CEO Jeremy Curwin said his organisation had conducted a fully consultative process with its players to allow them to make a decision, either individually or as a group.

“The team showed a united front in terms of the decision,” said Mr Curwin.

“It is clear that this tragedy will affect people in different ways, and Canterbury Cricket is here to support our players however we can.

“We fully respect their decision, and I am incredibly proud of how they conducted themselves throughout this process.”

The remaining two fixtures, between Northern Districts and the Central Stags in Hamilton and between the Otago Volts and Auckland Aces in Dunedin, will proceed – following consultation with all six Major Associations.

NZC CEO David White said his organisation endorsed the process and the wishes of the players at such a traumatic time.

“This isn’t about cricket; it’s about something much bigger and much more important than that. It’s about life, it’s about respect; it’s about family and community.

“Cricket and sport takes a back-seat to personal welfare.”

Meanwhile, the Auckland Aces squad has travelled to Dunedin without Martin Guptill and Lockie Ferguson who elected to step down from the match, a decision fully respected by their teammates and the Auckland Cricket Association.

Said Auckland Cricket High Performance Manager Simon Insley, “Both Martin and Lockie felt personally uncomfortable making the trip to Dunedin given the events in Christchurch, and also, the feelings and concerns of their partners and families.

“Auckland Cricket and New Zealand Cricket completely respect and support their decision. We understand that at times like this, families come first.”

The Central Stags have, meanwhile, driven to Hamilton as planned ahead of tomorrow’s round. All six of New Zealand’s Major Associations have joined with NZC in respecting the gravity of events and the pall across New Zealand in the wake of yesterday’s mass shooting.

“We are all so saddened by the terrible tragedy in Christchurch, and out of respect, neither our players nor team management will comment further on the Plunket Shield championship until the completion of the final round.”

The Stags had already been in a strong position to retain the national title, having built a 15-point advantage heading into the final round. Canterbury was the only other team left in mathematical contention.

Mathematics, however, will forever remain incidental to the tragic circumstances that unfolded in Christchurch on 15 March 2019.