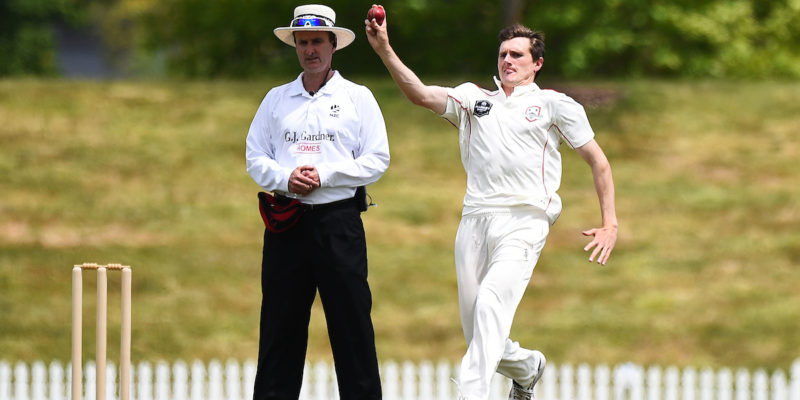 Canterbury headed to lunch still needing 245 runs from their last day at Seddon Park – but with four wickets suddenly already down.

Jimmy Baker had got the ball rolling for the hosts, breaking the opening stand in the fourth over of the morning. Canterbury’s second-wicket pair of Chad Bowes and captain Stephen Murdoch started to recover – before spinner Freddy Walker picked up the first of his brace for the session in Bowes, bowled on 41.

The wicket signalled a tumultuous three overs for the visitors who then lost Ken McClure in the next over as he exited caught behind off Neil Wagner, then Walker picked up Leo Carter in the following over: gone cheaply as well.

By tea, it was all over. Having started the session at 109 for four, Canterbury was bowled out for just 172 with Walker having stopped Murdoch on 55 before ripping out the final wicket to seal his third five-wicket bag: 5-41.

Wagner had chimed in with a three-for in an impressive victory, having lost the service of allrounder Daryl Mitchell on the first day.

A five-wicket bag to Jimmy Baker at his home ground and then Henry Cooper’s third first-class century this season were the highlights as hosts Northern Districts set up a challenging last-day chase for Canterbury at Seddon Park.

Canterbury went to stumps at 23 for no loss, needing a further 331 runs from black Friday’s final day after ND had declared their second innings at 302 for five, an overall lead of 353.

Prolific 26-year-old Northlander Cooper reached 130 to post his second Plunket Shield century in as many matches, and the fifth of his first-class career.

He shared a century stand at the top with Tim Seifert (51). After Canterbury’s Theo van Woerkom (4-76) fought back with a quick trio of wickets, super Cooper formed a second century stand with invaluable BJ Watling for the fourth.

Watling would be left unbeaten on 71* when captain Joe Carter called them in, leaving four overs to have a crack at the Canterbury openers who survived through to stumps.

The previous day it was the rescuing knock, today it was four catches behind the sticks for busy BJ Watling in a delicately balanced battle between ND and Canterbury in the Tron.

The visitors headed in for the night at 219 for seven in response to ND’s first innings of 294 all out — leaving 75 still to knock off the lead, with three in hand.

For both sides, it had been an all-round team effort, so far: players chipping in with bat or ball.

Will Williams finished with 4-52 for the Cantabs after wrapping up the ND tail with the new ball in the morning — just in time to deny them a third batting bonus point.

Scott Kuggeleijn was left unbeaten at eight after an important hand of 72 — ND’s top score, the allrounder stepping up to the plate after the unfortunate loss of Daryl Mitchell to injury on the previous day.

For Canterbury, opener Jack Boyle got a start with his 36; captain Stephen Murdoch and Ken McClure both got half centuries before falling to the Joe Walker-Watling combo while Leo Carter was hanging in there unbeaten on 37* overnight, but running out of partners.

Too many wickets had fallen for Canterbury’s liking, dangerous Baker coming back for a couple of quickies late in the day to sit on 3-50 overnight — five wickets in all tumbling in the last session.

Northern Districts was sent in by Canterbury at Seddon Park after a frustrating ground delay that saw just 2.3 overs of action before lunch.

As it eventually turned out, it took Canterbury only four overs to get both Seifert and Cooper back in the pavilion, Fraser Sheat and Ed Nuttall both enjoying the conditions – and Sheat adding Bharat Popli with a loaded cordon before another bout of bothersome showers.

The players went off at 58 for three, Carter on 20* and Watling 11* and it was Watling’s resilience that ultimately helped ND recover, somewhat, through the stop-start session.

The Test BLACKCAP shared a 52-stand with his captain before Carter, coming off his twin centuries in Auckland, edged Williams to third slip after a patient 37.

Watling then put on 62 with Daryl Mitchell before Watling himself became Williams’ second big wicket, caught behind for the same number.

Mitchell was trucking nicely until he suddenly pulled up lame with a foot injury, after having set off for an innocuous single off Henry Shipley.

Hopping immediately after he had set off, Mitchell retired on 27* in the 55th over, bringing in Scott Kuggeleijn in uncertain times at 166 for five.

Kuggeleijn put on a handy 60 with Katene Clarke before stumps for ND to resume at 226 for five.