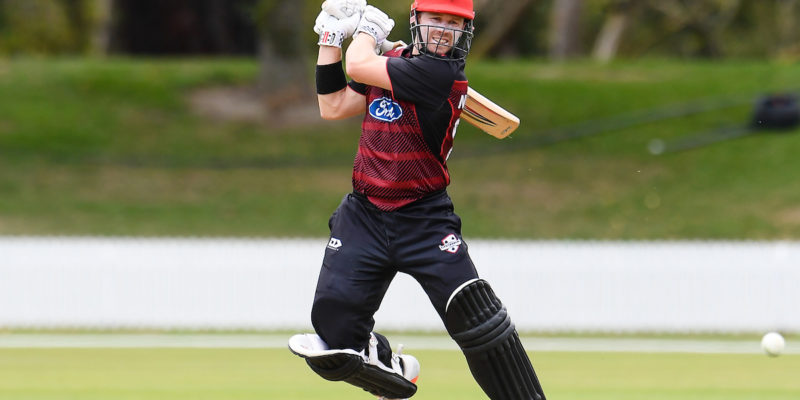 BLACKCAP Henry Nicholls produced a timely fifth Ford Trophy century – the sixth of his overall List A career – with 113 off 127 balls as Canterbury opened up a points lead with just one more round to go in the tight race for a home Final.

Five teams had entered today’s penultimate Round Nine with a chance of qualifying in the top three, the top qualifier at the close of play on Sunday set to gain direct entry to the upcoming Grand Final, while the second and third placed teams will play off to meet them.

Canterbury had been equal on 22 points with Northern Districts at the head of the table, but after the Central Stags thumped ND in Hamilton and Canterbury powered to a massive win over the Aces, it was advantage red and black heading into super Sunday.

Nicholls’ century and 96 off 101 balls to Ken McClure helped the hosts pile on 313 for four in their 50 overs, after defending champions the Auckland Aces had elected to bowl.

Chad Bowes (31) and Tom Latham (30) chimed in but it was Nicholls’ and McClure’s 164-run stand for the second wicket that set them up for a big one, snapping the Aces’ late winning streak.

Still, no one would have anticipated the Aucklanders folding so easily after their previous two potent wins, all out for just 97 in the 27th over of the chase – Canterbury gleefully pocketing a bonus point to go with their new record victory.

Cole Briggs top-scored with just 23 in his third appearance as Canterbury’s five-prong attack all got amongst the wickets.