A draw after day four 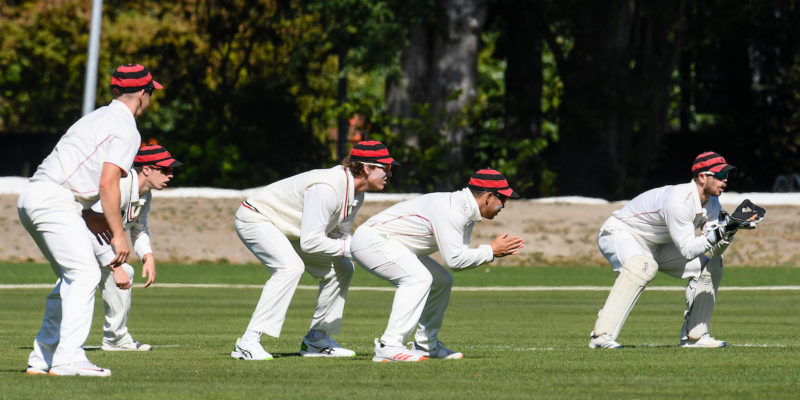 A thunderstorm sweeping over the isthmus was the last thing Canterbury needed on their overnight score of 83/2, still needing 339 to win. Murphy’s law. An early lunch was taken at Outer Oval, debutant Harry Chamberlain waiting on 20* with captain Cole McConchie 16* and time ticking by.

Play eventually got underway after lunch with a minimum of 57 overs left to be bowled, and by tea Canterbury had reached 138/3 with McConchie still at the helm with a half century.

That left a stiff target of 284 runs at 11.83 per over required with the rain already having done enough to prescribe a drawn result.

McConchie fell to debutant Ryan Harrison on 72 to provide the right-armer with his maiden first-class wicket, but with the required run rate inching over 20 per over, and six wickets still intact as the overs melted away even with the last hour taken, a result remained unlikely and the match finished with Canterbury 192/4 – and both teams still unbeaten heading into the final round of 2020/21.

Canterbury had already won the title, however, while the weather-hit Aces languished in third spot, still 47 points behind.

The Auckland Aces grafted through the morning session to push their lead past 250, first Graeme Beghin and then captain Robbie O’Donnell reaching their half centuries. Leo Carter meanwhile took a blow for Canterbury while fielding close in, and, while he initially passed an on-field concussion test, later left the field. Jack Boyle would come into the Canterbury XI as a concussion substitute.

By lunch, the Aces had extended their overall lead to 370, having lost just one wicket in the morning session to remain in the box seat in their second-to-last home fixture.

Beghin had been the sole to fall, caught behind off Ed Nuttall just before the break on 83 – the wicket ending his 155-run stand for the third wicket with the elder of the prolific O’Donnell brothers.

O’Donnell was meanwhile unbeaten on 77* at lunch, Cole Briggs his new batting mate. O’Donnell went on to his fourth first-class century, reaching an unbeaten 107* before he declared the Aces innings just before tea at 317/3.

The Aces attack then had two handy breakthroughs in 38 overs of Canterbury’s second innings, Chad Bowes caught cheaply in the seventh over off Ross ter Braak, and spinner Louie Delport accounting for Ken McClure who edged out on 35 at 59/2 upon Delport’s entry into the attack.

The Auckland Aces will take a handy 235-run overall lead into the third day in a fast-paced match at Outer Oval.

Canterbury’s unbeaten record in the 2020/21 championship looks to be under threat from the only other undefeated side this season after the visitors were rolled for 131 in their first innings – falling 104 runs behind the Aces’ first innings total.

Opening batsman Ken McClure’s 28 was the top score as the Aces hunted as a pack, spinners Louis Delport and Will Somerville ripping through the tail with Delport finishing with 3-11 off his 12 lean overs, and Somerville 2-23.

The Aces’ Will O’Donnell then set about making up for his duck in the first innings with a new first-class career best of 60 before he was trapped by spinner Theo van Woerkom.

But the Aces will resume on the third morning in a good position at 131/2, an overall lead of 235.

Canterbury’s pacemen were thriving again, the Plunket Shield already in the bag and the red and blacks now playing the last two rounds of the season for fun.

And it was Canterbury having most of the fun on day one, despite hosts the Auckland Aces having won the toss.

Quick Ed Nuttall (3-90) bookended the Auckland innings with wickets in the opening and closing over, the latter his 100th first-class wicket to shut off the Aces’ first dig at 235 all out.

Canterbury had taken the maximum bowling points again, Sean Davey continuing his career resurgence with 4-45 and Will Williams picking up 3-32.

Captain Robbie O’Donnell played a big innings for his side in the circumstances, coming in at 37/2 and losing several partners before Ross ter Braak stuck with him for the significant stand of the innings.

Together they put on 121 for the sixth wicket, O’Donnell (93) falling just seven runs shy of back-to-back first-class tons, after his 128 versus the Volts, and ter Braak registering a career best with his 58, a maiden half century just when his side really needed it.

After he was trapped by Davey at 218/6, however, Canterbury ripped through the remaining five wickets in the space of 15 overs.

Canterbury then had seven overs to negotiate before stumps and will resume on Day Two at 23/0.