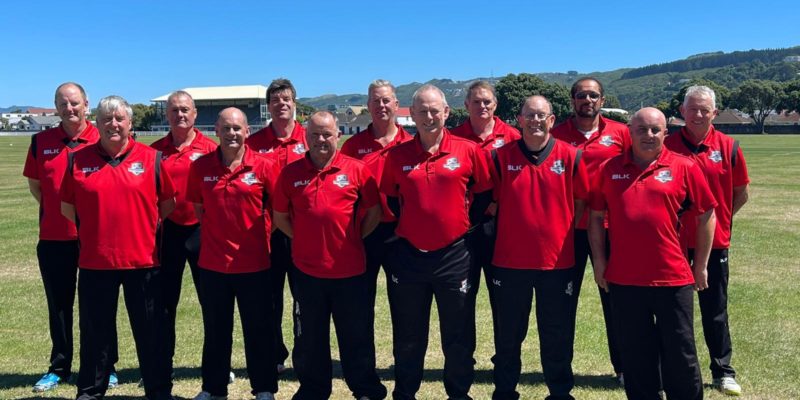 The Canterbury Over 50s team won the National Regional tournament held in Wellington last week. This was a four-team tournament of 45 over games with Auckland, Wellington, and Districts (CD/ND combined) teams also competing.

The tournament was organised with the support of Veterans Cricket NZ to provide representative playing opportunities for veteran cricketers supplementing the recent Interprovincial tournament at which a combined Canterbury/Otago team competed.

The majority of the Canterbury players play in the Christchurch Metro Presidents grade competition and entered the tournament with confidence having had wins over full strength Auckland, Wellington and Otago over 50 sides earlier in the season.

Put into bat in seamer friendly conditions Canterbury were in some trouble at 102/5 against an accurate Auckland attack however rallied to post a competitive 189 all out in the 43rd over with John Garry scoring 68, and Craig Gibb anchoring the lower order with 46 not out.

In reply Garfield Charles and Kelvin Scott quickly reduced Auckland to 17/6 with an impressive display of swing bowling backed by sharp fielding. Auckland recovered somewhat, however were eventually bowled out for 86 to give Canterbury a comprehensive victory. Charles finished with 3/10 and Scott 2/15.

Rained off without a ball being bowled.

Needing to win to ensure a place in the final Canterbury were again asked to bat on a pitch damp from the previous day’s rain. The going was tough as Canterbury went to the first 15 over drinks break at 43/1. However as the sun came out and the pitch settled down John Garry and Craig Gibb began to get on top of the bowling on their way to a 161 run partnership, Garry finishing with 100 and Gibb 72. Kelvin Scott then hit a quickfire 47 to see Canterbury through to a commanding 283/3 from their 45 overs.

In reply Wellington began brightly reaching 70/0 after 15 overs. However, the introduction of Scott Mason and Tony Gray slowed the run rate and eventually, Wellington finished well short of the target at 181/6 from their 45 overs. Mason finished with 2/25 and Jeff Roy 2/28.

The final saw the two unbeaten teams meeting each other with Canterbury again losing the toss and Districts electing to bat first. Districts looked to attack however consistent lines and lengths from the bowling unit saw them dismissed for 180 with the wickets shared – Scott 3/32, Charles 2/26, Mason 2/32, and Gray 1/29.

Chasing 181 for victory Canterbury began well with a fluent 69 from opener Alan Hemingway setting a good base. Despite the loss of a couple of quick wickets Jeff Roy (31 not out) and Wayne Robbins (30 not out) combined to see Canterbury comfortably home at 182/4 with 10 overs to spare.

That capped an enjoyable week of cricket that was hard and competitive on the field however with plenty of camaraderie amongst the teams at the end of each day.