Keep up with the Cantabs – NZ XI (GAME ONE) 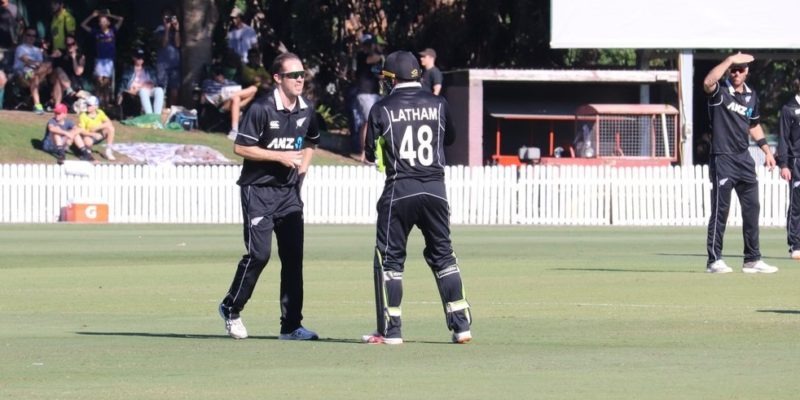 Canterbury Bowlers Matt Henry and Todd Astle did the damage to a near full strength Australian outfit in a nail-biting first match at Allan Border Field in Brisbane.

Australia limped to an unconvincing one-wicket win in Brisbane, with an under-strength New Zealand team pushing them through to the 49th over.

The New Zealand XI captained by Tom Latham, were missing nine members of their World Cup squad, finishing up their commitments in the Indian Premier League, and Ross Taylor, who is preparing for the tournament with English county side Middlesex, while Australia welcomed back David Warner and Steve Smith back in Green and Gold for the first time since serving their one year bans.

New Zealand got off to a shaky start losing both George Worker and Henry Nicholls in a fiery opening over from Australian paceman Pat Cummins, leaving the visitors in early trouble at two for one.

The shaky start left new BLACKCAPS contracted players Will Young and Blundell, who was batting four, with plenty of work to do, and they got into their work with an heir of patience and persistence that would have impressed the New Zealand selectors.

They put on 136 runs for the third wicket, both players reaching their half centuries before Young fell to Nathan Coulter-Nile for 60.

Blundell pushed on and reached 77 before he also fell to Coulter-Nile, and New Zealand captain Tom Latham fell shortly afterwards after a stunning catch from Steve Smith to leave the score at 155 for five.

The New Zealand middle-order wobbled as wickets continued to fall with none of the lower order able to add any significant runs – the visitors eventually all out for 215.

In their response, Opener Usman Khawaja hit Matt Henry for a four, before being bowled next ball.  Australia then looked to be in cruise control at 122 for one with captain Aaron Finch and Warner at the crease.

Warner looked dangerous, smashing a quickfire 39 and after he fell Steve Smith came in to make a slow but steady 22.

The Australia middle-order also fell away quickly and having been 122 for one, the home-side suddenly found themselves at 154 for six and under pressure.

Coulter-Nile came in and offered some resistance, but wickets kept falling, and when Coulter-Nile also fell for 34 to Todd Astle, Australia were nine down still requiring 11 runs to win.

Firebirds captain Hamish Bennett bowled a couple of tight overs at the death and New Zealand had thought they’d won it with a strong LBW shout off an Astle delivery which was turned down by the officials.

With the scores tied and needing just one run for victory Adam Zampa held on, hitting a loose delivery to the boundary to give Australia an unconvincing win.