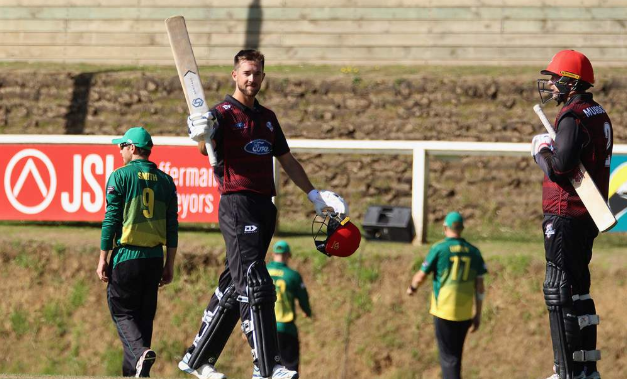 The opening batsman controlled a vital run chase for his side today at Pukekura Park, sealing a nine-wicket win – and moreover, home hosting rights for The Ford Trophy Elimination Final that will be held at Hagley Oval this Thursday – with a match-winning, unbeaten, List A career-best century: 114 not out off 104 balls.

After Tom Bruce won the toss and batted at the sunny arena, young Stags opening keeper-batsman Bayley Wiggins (103 off 94 balls) cut his way to his maiden Ford Trophy century in just his third List A innings, which was all the more remarkable for the fact he had scored 98 on this same ground exactly one week earlier, in his first List A innings.

On that occasion, it had been against Kyle Jamieson and company, now it was BLACKCAPS Matt Henry (back from a broken thumb at last) and Todd Astle that he had to contend with, but it didn’t seem to faze the busy youngster as he carried the team again.

Wiggins put on 57 for the first wicket with veteran Greg Hay, opening the batting in place of the injured George Worker; and 59 for the fifth with his Hawke’s Bay buddy Brad Schmulian, but the Stags’ middle order was largely missing in action as their stuttery season took one more hit.

Canterbury’s spin twins Theo van Woerkom and Todd Astle ripped through six wickets between them with Astle turning in a superb afternoon’s work for figures of 4-36, including a maiden as he stopped any Stags thoughts of escalating the strike rate at the death.

A tally of 237 in their 50 overs – the last man run out off the last ball – was never going to be enough if Canterbury got going.

First Chad Bowes (42 balls) then Jack Boyle (60 balls) reached their half-centuries in a 109-run opening stand that blunted the Stags’ frontline attack, which was missing both Ben Wheeler and Doug Bracewell in their injury-plagued season.

Ajaz Patel finally got the breakthrough in the 20th over, Kieran Noema-Barnett claiming the catch in what may be his final white-ball appearance, but Bowes was resilient and the first would also be the last wicket of the afternoon.

Just as Wiggins had gone to drinks on 99 in the first innings, Bowes went to drinks on 98 but both stayed put and raised the bat, Bowes off 96 balls, including two sixes.

What a knock by @bowesy07! His 5th List-A century and a new high score. #WeAreCanterbury #CricketNation

His next personal target was to knock off 112 not out – which he had reached on three occasions previously. He finished by raising his bar by two runs this time, before Stephen Murdoch bashed a six and clinched the winning runs in the 38th over.

It was a vital win for Canterbury, ensuring they would secure hosting rights for Thursday’s 2v3 Eliminations Final at Hagley Oval where they will meet the Otago Volts.