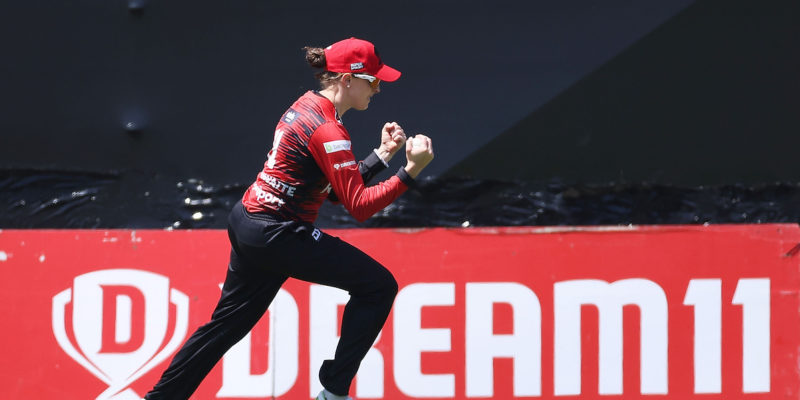 The Canterbury MAGICIANS have conducted a successful raid on the Basin Reserve, becoming the second team to join Wellington Blaze in the top three qualifiers.

Sent in by Mags captain Frankie Mackay, Blaze suffered a rare tough day at the office with the bat, against a classy Canterbury attack that restricted them to 132 for nine.

After her scorching recent form, Sophie Devine was the big wicket but she was removed for just 13 today by her fellow WHITE FERN Lea Tahuhu (2-22), the pace weapon enticing a catch collected by a delighted Mackay.

HUGE moment! Tahuhu strikes in her third over, removing Devine as Mackay takes the catch. Tune in LIVE on @sparknzsport and @TVNZ DUKE #SuperSmashNZ pic.twitter.com/u1LZ6qdbrP


Tahuhu also stopped an inventive Leigh Kasperek who continued to show her style with the bat, top-scoring with 39 off 32.

But that wasn’t enough to trouble the MAGICIANS, particularly after a terrific performance from Gabby Sullivan (below) whose four overs through the middle went for just 14 runs, and brought the wicket of Melie Kerr.

Spinners Amy Satterthwaite (2-5 off the last two balls of the last over) and Mackay (2-25 off four) made sure the pressure stayed on to set up a confident run chase.

Mackay was an early loss when she was run out off the lethal arm of Thamsyn Newton, but it would be the only wicket to fall as Satterthwaite (71 not out off 50 balls, including two sixes and nine fours) and Nat Cox (48* off 49, including five fours and one six) brought home a big nine-wicket win with 10 balls to spare.

Huge over for the Magicians! Satterthwaite takes 20 off the 9th over, including this maximum 🔥 #SuperSmashNZ pic.twitter.com/4KHuWoM01C

The victory saw the Magicians rise further above the Auckland Hearts, who remain in third spot, with Northern Spirit still an outside chance of overtaking them for the last spot in the Finals.