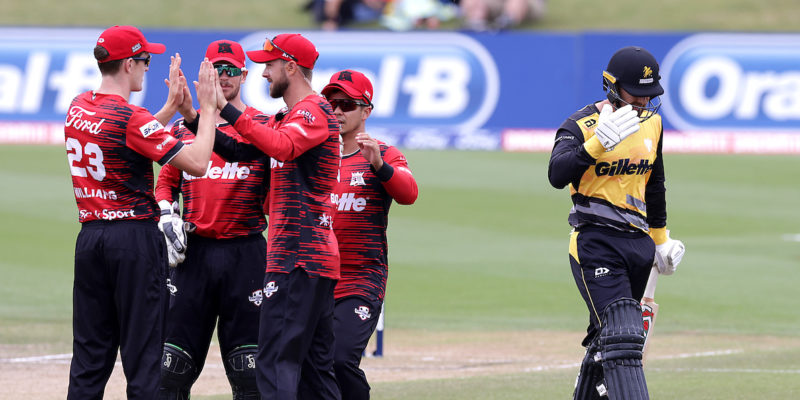 Cole’s cavalry has charged on at Hagley with the Canterbury Kings taking a thrilling win off the Firebirds – to join them at the top of the ladder.

The Kings shrugged off their intense schedule with a four-wicket win, captain Cole McConchie leading with bat and ball and clinching the winning run off Jimmy Neesham’s last over to finish unbeaten on 48*, off just 34 balls.

With help from Jack Boyle (39) and man of the moment Daryl Mitchell (34 off just 23 rocks), the steadiness and calm of the royal boss ensured his side got across the line with two balls to spare, chasing down the Firebirds’ 154 for seven.

The Wellington side’s plans will have been upset on the day after a nasty blow to captain Michael Bracewell’s forehead during the first innings.

Bracewell was at the non-striker’s when Neesham punched what, on any normal day, would have been an innocuous single off spinner Blake Coburn. Unfortunately for Bracewell the ball’s trajectory took it straight into his forehead, leaving him with a bleeding gash.

NEWS: Michael Bracewell has gone to hospital to get some stitches, he’s been replaced under concussion protocols by Ben Sears. Hamish Bennett to take over the captaincy for @cricketwgtninc 🏏

Recovering from a scratchy start with the loss of big early wickets, the Firebirds had been 108/4 at that point after Bracewell had elected to bat.

He had a run-a-ball 31* in a burgeoning 68-stand with Neesham when the accident happened and Bracewell was forced to retire hurt, concussion a likely corollary.

Neesham went onto his best score yet for the Firebirds with a 38-ball 49, but he was caught off Will Williams on the cusp of his half ton in the 18th over.

It wasn’t Neesham’s luck day either, with a compound dislocation of his left ring finger. He underwent surgery that night and will be out of action for coming rounds.

Jamie Gibson had meanwhile creamed one first ball only to be caught in the deep, gone for a golden duck straight after Bracewell made his way back to the dressing room: the omens were all in place that not much was going to go right for the Birds on this occasion.

Spinner McConchie had been devastating up front with the cheap wickets of both Rachin Ravindra and Devon Conway, knocking over their timber with deceit and sleight of hand. He went on to net a lean 2-14 off his four overs.

A top afternoon from the Kings’ captain who entered the arena again with the bat at the start of the 10th over, after dangerous Daz Mitchell had just been trapped by the pumped up young rocketman Ben Sears, on as the concussion substitute.

The Firebirds gutsed it out and scrapped for their six wickets, running out Cam Fletcher when the scores were tied in the last over. However, there would be no phoenix rising from the ashes on this occasion as McConchie did the honours to hand the defending champs their first loss of the season, after their five straight wins.