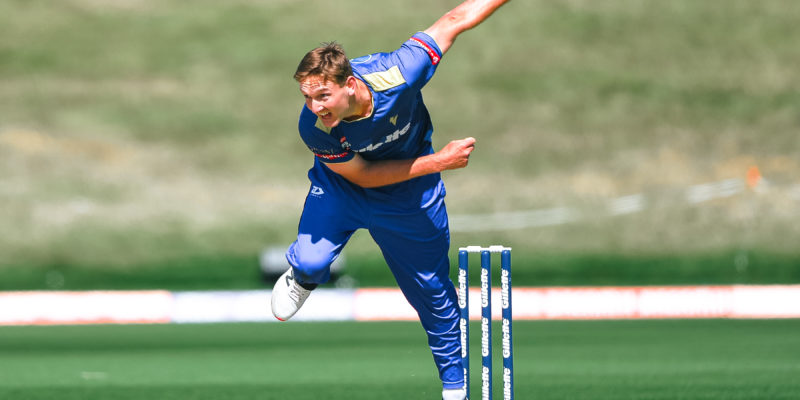 Canterbury’s high performance staff had to work quickly on the back of Will Williams’ transfer to Lancashire, and were able to secure the services of 23 year old McKenzie after extensive conversations with the young athlete.

McKenzie talked to CCA about the process around his unique contracting,

“I was contacted by Peter Fulton a couple of weeks ago explaining the situation and highlighting the possibility of an opportunity within the Canterbury set up for the coming summer. After this phone call, I was naturally very eager to explore these opportunities should they arise, and was fortunately offered a contract over the last couple of days, an outcome I am both extremely excited and grateful for.”

Head Coach Peter Fulton is happy to be able to bring in someone with prior domestic experience,

“I am delighted we have been able to sign Angus to a contract for the 22-23 season. With the loss of Will Williams, we had to change plans relatively quickly. To be able to bring in someone who has had experience at this level already with Otago is a really nice addition to our squad.”

“I am looking forward to working with Gus once he returns from the UK and I know he is excited to get stuck in upon his return and add some quality to our pace bowling group.”

McKenzie is looking forward to starting with Canterbury, saying,

“I am extremely excited at the prospect of representing Canterbury. From the outside, it is hard not to respect the professional and clinical nature in which Canterbury sides compete in not only their cricket, but all of their sporting codes. There is also obviously a wealth of experience and talent within the squad, and I look forward to learning and improving alongside these guys on a daily basis.”

McKenzie comes to Canterbury with a few familiar faces in the squad, as he links up with Matthew Boyle and Mitch Hay after representing a New Zealand XI earlier this year,

“I’ve played a fair bit of cricket against the younger lads in the squad in particular, with a lot of it being A cricket out at Rangiora over the past couple of summers. I also had the pleasure of playing with Mitch Hay and Matt Boyle in the NZXI fixtures against the Netherlands in March this year, so it will be good to link up with them again.”

Speaking of the Garden City, McKenzie is looking forward to settling into his new home,

“I have very fond memories of Christchurch, having grown up playing various school, age-group and A cricket either in Christchurch or out at Lincoln. I’m looking forward to getting to know and exploring what Christchurch has to offer over the coming summer.”

McKenzie will join the team towards the start of the season as Canterbury prepare for another year challenging for all three titles.