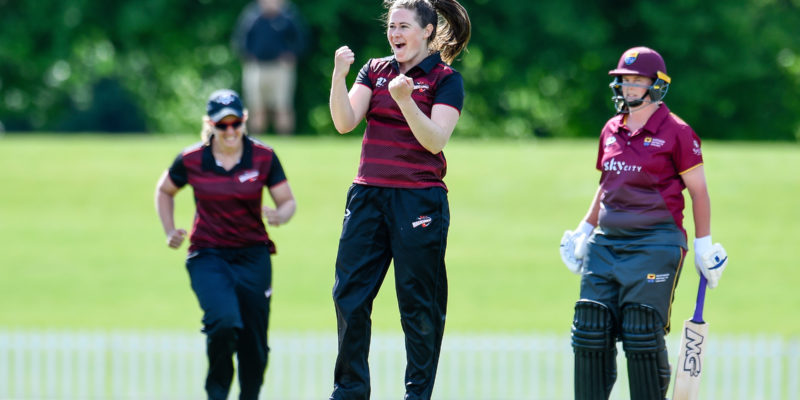 In her 71st match for the Canterbury Magicians, Jacinta Savage had an absolute blinder with bat and ball.

Previously she had three List A fifties to her name, a best of 55 and just 21 wickets from 1,076 deliveries.

Today she took 6-18 off just 43 balls to bag the second best figures in Canterbury’s exceptional history.

The Savage performance stunned Northern Districts who had made a good start to the match by winning the toss, sending the unbeaten Magicians in and, crucially, getting rid of Frankie McKay early.

McKay was the first to fall in the ninth over, bowled by Meddy Hyde before Northern newcomer Kayley Knight made it 46/2 a couple of overs later.

When Knight removed Kate Ebrahim cheaply as well, Northern had every right to have a spring in their step after a great start with the ball.

And then out to the middle came Jacinta Savage.

The number five combined with Natalie Cox (37) in a 75-run stand for the fourth wicket that was pivotal to getting her side back in the contest, then followed up with a 57-run stand with Kirsty Nation to take the team through to 191/5.

By the time Nation fell to Lucy Boucher in the 38th, Savage already had her fourth half century – punched off 67 balls, including six boundaries – and was en route to her career best 59 off 81.

Boucher struck again to finally stop her in her tracks, Canterbury going on to be dismissed off the penultimate ball of the innings for 236.

Coming off back to back wins against the Blaze, it should have been game on for Northern’s strong batting line-up, but Savage was about to have an even more memorable afternoon with the ball.

Kate Sims then claimed Northern captain Felicity Leydon-Davis cheaply as well, and the Mags were in with a sniff.

In the 12th, Savage ripped out two more wickets in the space of four balls, before the experienced erstwhile international pair of McKay and Ebrahim put the squeeze on through the middle.

Ebrahim was finally rewarded with the wicket of Mikayla Templeton at 81/4, Northern duo Olivia Lobb and Eimear Richardson left to attempt a fightback.

The runs just weren’t flowing and then, in the space of three balls, Sarah Asmussen claimed both Lobb and Boucher to have the Magicians seven down in the 34th over.

Now the stage was set for a bag, Savage replacing Sims in the 37th. She struck third ball as Gabby Sullivan held the catch to dismiss Meddy Hyde, then got Richardson (35 off 39) at the end of the over for her maiden five-for.

Asmussen then hunted for the final wicket next over to wrap things up, but it was Savage’s day. She clean-bowled Charlotte Sarsfield with her next delivery to finish with her standout 6-18 off 7.1 overs, wrapping up a big victory with 11.5 overs to spare.