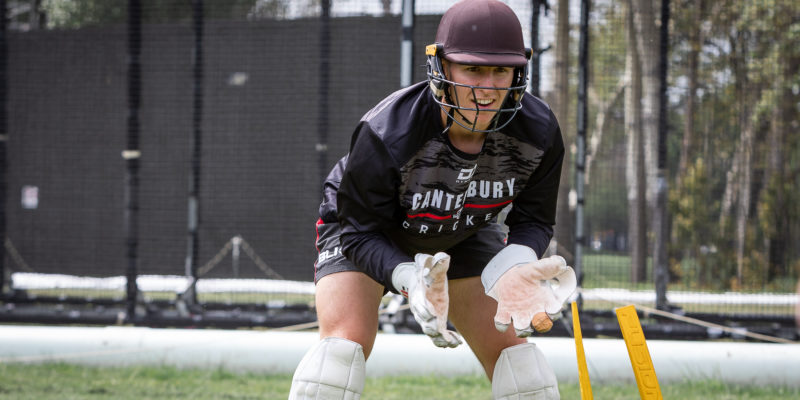 Canterbury Cricket are excited to announce the players who will make up the Canterbury ‘A’ squad for the 2021/22 season.

These players meet our development policy, have shown potential to play at the next level and fill specific roles in our wider succession plan.

They Hay brothers, Mitch and Matthew feature again this season after making their respective first team debuts last year. Matt attributes the opportunities presented through the ‘A’ programme as instrumental in helping him make the step up to professional cricket.

“The A program is a great opportunity to train with better players and on better facilities so that you can extend your game. You get to work with really good coaches and play quality opposition on quality grounds. You learn skills that you need at the next level and it’s something that definitely changed my career coming into it and moving forward.”

Up and coming wicketkeeper Mitch is relishing the opportunity to train under Canterbury veteran Cam Fletcher.

“Fletch is very skillful and it’s been really good to have discussions with him – there’s quite a few things I’ve picked up from him that have been really beneficial. Having such a great guy to talk to and use as a sounding board for a few ideas and thoughts, he’s just been great to learn from.”

19-year-old Darfield player Zac Foulkes is one of a number of new faces in the squad this year, with the former St Andrew’s College student earning a spot for the 2021/22 season. After having to decline a debut Canterbury ‘A’ appearance last year due to a broken hand, Foulkes impressed selectors in two ‘Town v Country’ games in the lead up to this season. Relishing in the chance to play with and against some of Canterbury’s best, Foulkes said,

“It was pretty awesome to get out and face guys like Ed Nuttall who I’ve watched quite a bit growing up.”

“Having some of the country [Canterbury Country] guys around like Shippo [Henry Shipley] and Chambo [Harry Chamberlain] meant I could watch how they go about their cricket and try implement some stuff into my own game.”

Foulkes has drawn plenty of confidence from his selection saying,

“It’s a great feeling to have the backing of Donks [Brendon Donkers] and Peter [Fulton]. I don’t want this to be the last step for me – I want to push on and earn the chance to represent Canterbury in the future.”

Another young talent being welcomed into the ‘A’ programme is 18-year-old Christchurch Boys High School old boy, Max Hamilton.

Canterbury Cricket were made aware of Hamilton when he was still in school, with coach Brendon Donkers spending some time with Max over the winter working on his bowling. Donkers said,

“We worked on a few things – action, shape through the crease – but the main takeaway was that Max is someone who has a real desire to bowl fast.”

“He is an eager learner and is very coachable. We see him as someone with a high ceiling and as a young player, we want to help him develop into a resilient fast bowler in the future.”

Primary, Hamilton says he is looking forward to being in a high-performance environment where he will be given the opportunity to improve his game.

“It’s a great opportunity to be around a few guys I’ve heard about but haven’t had too much to do with in the past. Training on great facilities and having access to high level coaching is an exciting prospect.”

Speaking of the entire squad and the selection of these players, coach Brendon Donkers said,

“The players in this squad are at varying stages of their cricketing career, with some already representing the Canterbury first team and others who have only just finished high school. The common denominator across these players is they all have potential, at some stage in the future, to play first-class cricket for Canterbury.”

“We want to nurture these talents so that hopefully when the time comes for them to make the step up, they’ll be ready.”